LONG BEACH, California (April 9, 2022) — The Motorsports Hall of Fame of America (MSHFA) announced its 2023 Induction Class Saturday during the Stand 21 Racing Goes Safer seminar at the Acura Grand Prix of Long Beach. The landmark 35th Motorsports Hall of Fame of America Induction Celebration presented by Toyota Racing, which will formally usher the Class of 2023’s nine members into the MSHFA, will be held in the Hall’s home of Daytona Beach, Florida, March 6 – 7, 2023.

“Part of the reason we wanted to make the announcement at the Racing Goes Safer seminar is because several members of the Class of 2023 have played a major role in improving racing safety,” said MSHFA President George Levy. “Our thanks go to Stand 21’s Yves Morizot and the Racing Goes Safer Foundation for making that possible.”

Two of the inductees at the forefront of safety improvements are Drs. Olvey and Trammell.

“We are honored and thrilled to be included in the Motorsports Hall of Fame of America class of 2023,” Drs. Olvey and Trammell said jointly. “We want to thank the many who have supported us and those from whom we learned on our journey to make motorsports safer.”

The MSHFA Class of 2023 was unveiled in a press conference during the Racing Goes Safer seminar by Levy and 2015 MSHFA inductee and star road racer Tommy Kendall. 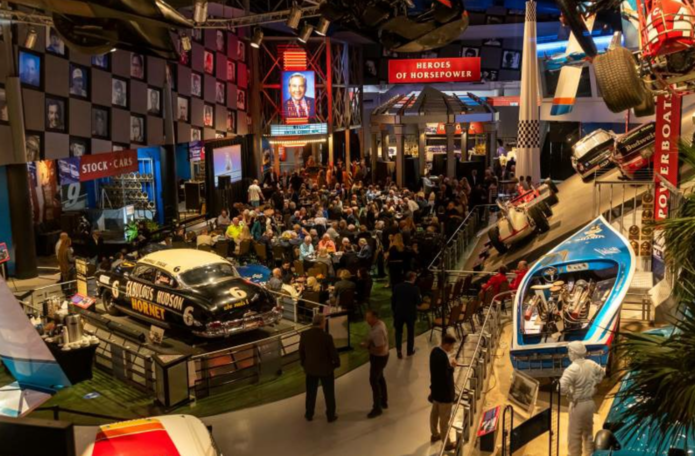 The nine Class of 2023 honorees will be formally brought into the Hall on Tuesday, March 7 in the 35th

Annual Induction Ceremony Presented by Toyota Racing, the traditional black-tie gala that is the crowning event of the two-day, multi-function MSHFA Induction Celebration.

The Induction Ceremony, which was sold out for the Class of 2022 celebration, will be preceded on Monday, March 6 by the traditional "Heroes of Horsepower" reception and strolling dinner (pictured above) at the MSHFA Museum on the grounds of Daytona International Speedway. Firestone sponsored this year’s Heroes of Horsepower reception that was another sell out event.

Daytime events include the annual Heritage Luncheon on Monday and the annual Inductee Breakfast on Tuesday morning.

Current plans call for 2023's Historic inductees to be ushered into the MSHFA as a featured highlight of the Tuesday morning breakfast, which was sponsored by American Honda this year.

Through last month’s Class of 2022 induction, 279 Heroes of Horsepower are currently in the MSHFA, a number that will grow to 288 with the 35th Induction Class.

The Motorsports Hall of Fame of America Class of 2023:

Zora Arkus-Duntov (Sports Cars) — The “Father of the Corvette” turned America’s sports car into a racing juggernaut despite frequent opposition from GM upper management. Because of Duntov, Corvettes raced and won at Daytona, Sebring and Le Mans, captured countless sports car and drag racing championships and set numerous speed records. He built the Corvette SS and Corvette Grand Sport, and influential CERV I and II racing research vehicles. Trained at the Technical University of Berlin, Duntov was a gifted driver, twice winning his class at Le Mans (1954-55) and setting records at Pikes Peak and Daytona.

Dick Burleson (Motorcycles) — “King Richard” was America’s most successful enduro racer. Burleson started riding at 18. By his mid-20s, he was at the top of the discipline, which involves competing against the clock on extended cross-country, primarily off-road courses. From 1974 to ’81, he captured a record eight straight AMA National Enduro Championships. He also won eight straight gold medals in the International Six Days Enduro, sometimes referred to as the “Olympics of Motorcycling.” After the record 3-time AMA Amateur Athlete of the Year retired from riding, he developed and marketed off-road riding apparel and accessories.

Art Chester (Aviation) — After winning the 1930 National Air Races, Chester designed and built a series of groundbreaking planes named after Popeye characters. Starting with the 1933 National Air Races, he won major contests over several seasons in his Chester “Jeep” and held the world speed record at 237 mph. Aboard “Goon,” Chester won the prestigious Greve Trophy at the 1939 National Air Races. During WWII, he helped develop the tide-turning P-51 Mustang. As the Professional Race Pilots Association’s first president, Chester fathered today’s Formula 1. He perished in his final design, “Swee’ Pea II,” in 1949.

Ray Evernham (Stock Cars) — The former New Jersey modified driver innovated ways to manage teams and became one of the sport’s most prolific winners. In the 1990s, he and inductee Jeff Gordon (MSHFA Class of 2018) combined for 47 NASCAR Cup Series wins and three titles (1995, 1997, 1998). To improve pitstop speed and efficiency, he employed former athletes as crew members with specialized roles and clockwork choreography. Later, Evernham’s own team won 23 poles and 13 Cup races. An ESPN/ABC and NBC analyst and AmeriCARna host, in 2021 Evernham and inductee Tony Stewart (MSHFA Class of 2019) launched the groundbreaking SRX Series.

Fonty Flock (Historic) — Preceded into the MSHFA by younger brother Tim Flock (MSHFA Class of 1999) , Truman Fontell Flock had hall of fame credentials all his own. In 154 NASCAR Cup Series starts from 1949-57, the Fort Payne, Ala. native scored 19 wins, 33 poles and 83 Top 10s. He also won the 1947 National Championship Stock Car Circuit title and 1949 NASCAR National Modified Championship. In 1951, Flock was runner-up to Herb Thomas (MSHFA Class of 2017) for the Cup Series title despite shading the 2017 inductee in wins, Top 5s, Top 10s, poles and laps led. Flock won the following year’s Southern 500 wearing a T-Shirt and Bermuda shorts, which became his trademark.

Darrell Gwynn (Drag Racing) — Gwynn was named one of the NHRA’s 50 Greatest Drivers All-Time for his stellar accomplishments in a tragically truncated career. He collected the 1983 Top Alcohol Dragster World Championship, then moved to Top Fuel, where he took 18 victories and never finished lower than 4th in points between 1986 and 1989. A 1990 accident resulted in paralysis and the loss of his left arm. As an owner, Gwynn fielded a very competitive TF car for Mike Dunn for close to a decade. He started the Darrell Gwynn Foundation in 2002 and, in 2014, opened The Darrell Gwynn Quality of Life Chapter of The Buoniconti Fund.

Ab Jenkins (Speed Records) — The man who popularized the Bonneville Salt Flats for racing set more speed records than anyone. In the 1920s, he raced trains from Salt Lake City to Wendover and from NYC to San Francisco. He won both contests. In the ‘30s, he ran a series of aircraft-engine “Mormon Meteors” at Bonneville. In 1936, he drove one solo 3,254 miles in 24 hours at 153 mph, setting a record unbeaten until 2005... by an 8-man team. Later the longtime Salt Lake City mayor set 21 more records in office, including ones for Pontiac just before his death. The automaker named the Bonneville in his honor.

Drs. Steve Olvey & Terry Trammell (Open Wheel) — They revolutionized racetrack emergency services, in so doing setting a standard for every form of racing, saving dozens if not hundreds of lives. In the 1970s, Olvey developed the first US traveling motorsports medical team for what is today’s IndyCar Series. During their tenure in open-wheel racing, the only deaths were from non-survivable injuries. No driver was paralyzed or failed to return to competition. Many were saved from amputation. Both remain consultants to IndyCar. Trammell won the 2021 Louis Schwitzer Award for biomedical engineering advances for driver safety.

About the Motorsports Hall of Fame of America:

The MSHFA is the only hall that honors all American motorsports: cars, motorcycles, airplanes, off road and powerboats. Its mission is to celebrate and instill the American motorsports values of leadership, creativity, originality, teamwork and spirit of competition. Founded by Larry G. Ciancio and Ronald A. Watson, it held its first induction in 1989. Watson spent the next 30 years tirelessly building it into the nation’s premier such hall until his passing in 2019. The original museum in Novi, Mich., relocated to Daytona Beach, Fla., in 2016 and greets more than 100,000 guests a year. MSHFA is operated by the nonprofit Motorsports Museum and Hall of Fame of America Foundation, Inc.

MSHFA Photos by or courtesy of Thomas R. Miller Photography and Brian Cleary